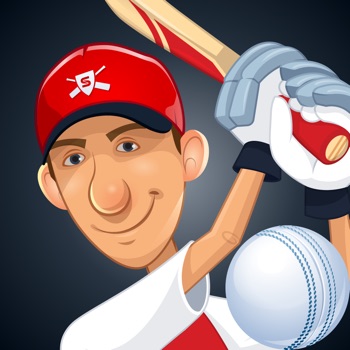 Hit out or get out in the world’s most popular cricket game, Stick Cricket®!

Easy to play yet hard to master, Stick Cricket offers you the chance to:

DOMINATE THE WORLD
From minnows to modern day masters, only a Stick Cricket legend can successfully conquer all 14 countries en route to World Domination.

WIN THE WORLD CUP
The most coveted silverware in cricket is up for grabs. Do you have what it takes to become a national hero?

SLOG THE STARS FOR SIX
Pad up for your country against the greats in All Star Slog. If their reputation doesn’t scare you, their fierce bouncers might!

WIN THE WORLD T2
16 teams battle it out in Bangladesh in an exhilarating two-over tournament tussle.

HUMILIATE YOUR MATES
Take on your friends, via Wi-Fi or Bluetooth, in the ultimate battle for bragging rights.

TEST YOUR SKILL
Get your eye in with a net session at the Academy, or take a skill test to improve your technique.

TRACK YOUR STATS
Look back at all the carnage you’ve caused! Just make sure your career run rate is more like Botham than Boycott.

More by this seller

TEAM UPDATES: The Stick Cricket selectors have come out of retirement to implement a much-needed update to all national squads. Some huge players - Pup Clarke, Dan Vettori and Kumar Sangakkara - have been put out to pasture. One ‘huge’ player in particular, Dwayne Leverock, has been retained purely for nostalgic purposes.

We did consider adding a beard to Shane Warne, but then we realised that would look completely ridiculous.

BUG FIXES: We’ve responded to an urgent request from the unemployed Australian cricket team, who literally have nothing better to do with their time than play Stick Cricket for the next few months, to get the game compatible with iOS 11. Unlike the Aussies, the game will now continue to work!

We’ve also resolved an issue where the game would crash if you win the World Cup. The crash now only occurs if you win with an implausible team (England).